AGGRESSIVE AND EFFECTIVE REPRESENTATION -
YOUR INITIAL CONSULTATION IS FREE! 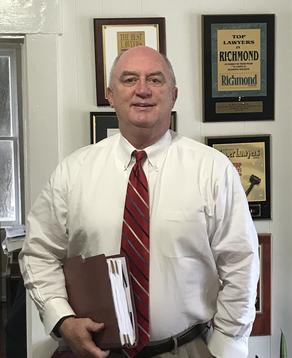 Mr. Marks earned his undergraduate degree from the College of William & Mary in 1981, and his Juris

Doctorate from the Marshall-Wythe School of Law of the College of William & Mary in 1985.  Mr. Marks

joined the Firm of Marks & Harrison (formerly Marks, Stokes, & Harrison) in 1985.  Specializing in

Mr. Marks has continued to limit his practice to representing individuals in automobile accidents

and on-the-job accidents, as well as assisting individuals pursuing disability benefits before the Social

Law School: ​​Marshall-Wythe School of Law at the College of William & Mary, 1985

About:  Mr. Marks is active in the community, serving on the United Way of Hopewell/Prince George Board of Directors (formerly President and Chairman) and former President and Board Member of the Hopewell Humane Society.

Mr. Marks has coached athletic teams in numerous sports (basketball, baseball, soccer, volleyball, and football).  Mr. Marks has also sponsored a basketball league in Hopewell for 10-13 years old boys, while also coaching in the league for many years.  He presently serves as the Head Boys' Varsity Volleyball Coach at Prince George High School.  In 2016-2017, he was named Conference Coach of the Year.

Marks & Associates, P.C.has been recognized as one of the top Law Firms, as reflected in the US News & World Report.

"The Best Lawyers in America,"

B. Mayes Marks Jr. has also been named one of the top attorneys in the Richmond area (Richmond Magazine).